Chapter 1: Cutting the Crap on Your Chart

Why all those lines are hurting… not helping you.

August 3rd, 1492.  A billion-dollar bet… financed by the King and Queen of Spain.

All he had to do was find the new world.

At the time, he had two choices:  Dead Reckoning which involved pins, maps and a compass.  Not an option when you’re sailing into territory that hasn’t been mapped before.

So he was left looking for guidance by the stars.  That’s right, he could look to the heavens and gauge his course based on the ship’s relationship with a star. 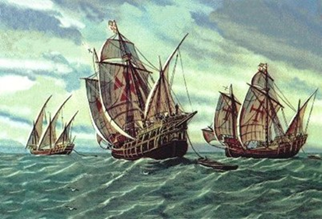 Believe it or not, Columbus was in far better shape, sailing blind than most retail traders in the market right now.

These folks are betting far less than a billion bucks.  And they have detailed maps in the form of charts, oscillators, indicators doohickies to help.

In the end, they end up looking to the heavens, at first for help and then miraculous divine intervention.

We often find there are two extremes when navigating price action:

Here’s a harsh reality few traders are willing to accept:  Both approaches suck.

Well, let’s start with all the indicators.  How many times have you traded a supposed ‘crossover’ only to get burned when price doesn’t swing… or trend… or do whatever it’s supposed to do.

Or how about this?  How many times have you watched RSI, MFI or whatever ‘I’ you like get pegged above 80 or below 20 – only to sit there for eternity before coming back to the average?

And the traders on the other extreme?  Thanks to that clean chart, you can now see that perfect ‘double bottom’, or ‘double top’ or ‘flying smoke stack formation’.  Beyond a shadow of a doubt, you look left, see the pattern and make your move with confidence.

After a few of these supposedly locked in trades, your chart isn’t the only thing that’s cleared out.  Your account is too.

To be clear, we’re not just talking about the losing trades that result from these extremes, we’re talking about the winners too.  Because, when you actually exit with a profit, more often than not you quickly realize that you’ve left a lot of money on the table.

Here’s the deal:  Just as Columbus found a way to reach the new world, there are thousands of traders that generate steady profits by trading with price action.

They do it every day, in the markets of their choice.  They generate reliable, consistent results that they can count on to pay the bills.

Not just in one market, with one lousy strategy that takes ages to surface either.  They do it in multiple markets, across multiple timeframes, opening themselves up to ten times more opportunity.

And best of all:  They follow a basic system that allows them to ride their winners and cut their losses by using clear charts and real market intelligence.

Bottom line?  They see opportunity that other traders can’t.

Chapter 2: Spotting Opportunity in Any Market

A simple way to surface a Price Action Trade.

Here’s a dirty little detail about the Columbus voyage.  He wasn’t the one that actually spotted land.  In fact, there’s a good chance that he doctored his journal to support the claim that he was the one to lay eyes on the new world.

The guy who really saw land?  Rodrigo de Tirana, a Spanish sailor on the La Pinta.  He was one of 88 sailors working across three ships.  It was October 12th, 1492 at 2 in the morning.  Although Columbus would claim that he saw “light” at 10pm the night before.  Sure, uh huh, right Chris.

In the end Columbus would get the credit and Rodrigo faded into obscurity.  You don’t read much about poor Rodrigo.

Why should you care?  Well, think of yourself as the Christopher Columbus of your trading account.  (Or pick whatever famous navigator, explorer or hero that suits you).

History really didn’t care who spotted land first… and your bank account doesn’t care what strategy you use, or what market you trade to bring profits home.  Just like Columbus, you’ll get 100% of the credit and 100% of the blame.

So why limit yourself to one strategy and one currency pair or market?

Doing this effectively puts blindfolds on all of the other strategies or strategies that could be out spotting opportunity for you.

Or say you have 20 strategies, but only focus on two or three markets?

Both approaches limit profit potential while increasing risk.  Imagine if Columbus was the only one looking for land.  Or what if each of the 88 sailors were looking for something different?

Here’s a perfect example of a Quality Price Action Setup any trader at any level can watch for:  Tails and fades.

They’re like glimmers of light in a distant land showing you the way – and you can spot them at a glance.  Literally in seconds.

To start you’re looking for waves in a trend. Every market experiences major trends.  Within those trends, there are smaller price action waves – in both directions.  In fact, as you scan markets, you’ll see different price waves in different stages of development.

Early on, these small waves demonstrate solid momentum – but like anything else – they eventually start to fade.  The dead giveaway that they’re losing steam?  Candles with tails and fading momentum.

Check out the EUR/USD on a 5-minute chart and see if these three steps surface an opportunity worth trading: 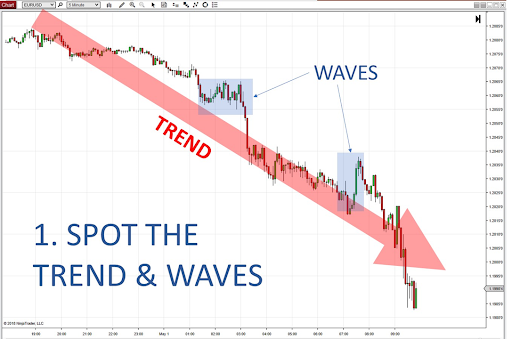 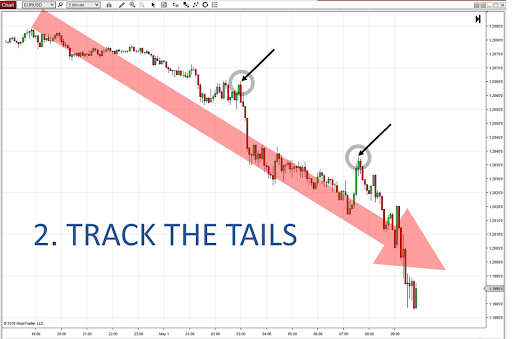 Sure enough, as price action developed for the EUR/USD, the trend was tested, and a fantastic sell entry presented itself. 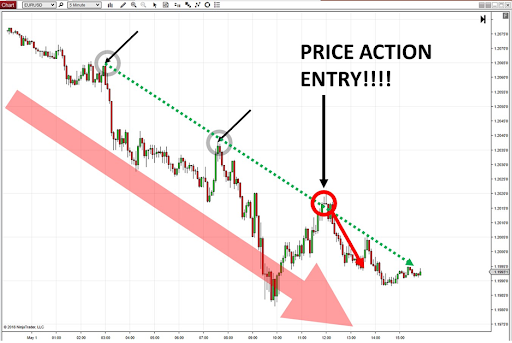 Take your entry with ease, simply by riding the waves within the larger trend!

Oh and the exit?  You guessed it.  It came when the next wave started to surface. 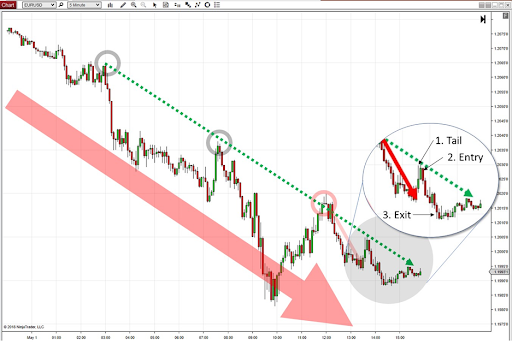 Look closely and you’ll see that this wave again:

One approach, three simple steps – all of which could be completed in seconds.  Imagine being able to scan all of the major currency pairs or contracts using this simple approach?

Like looking for land, you either see it or you don’t.  No mirages here.  No second guessing.  Even better – you can do it in your sleep moving quickly from one market to the next.

So one winning trade.  Big deal.  Who cares, right?  With an easy to spot strategy in place, let’s scale so that it generates profits while cutting losses.  Retirement in this lifetime would be nice.

Chapter 3: Sailing with the Wind for Lasting Profits

How to scale a trade for more profits, while cutting losses.

The first voyage Columbus made got the glory.  It was the ones that followed that made the money.  Once back in Spain, getting the King to invest in a second trip across the pond was a breeze, especially once they knew where they were going.

The key?  Reducing risk wherever possible.

The same exact principle applies when trading price action.  Once you have the trend established, and know where to spot fading waves, it’s your new job to grab profits while cutting losses.

The first step is to minimize your risk.  You can do this by advancing your our stops to follow established chart structure as the trade develops. 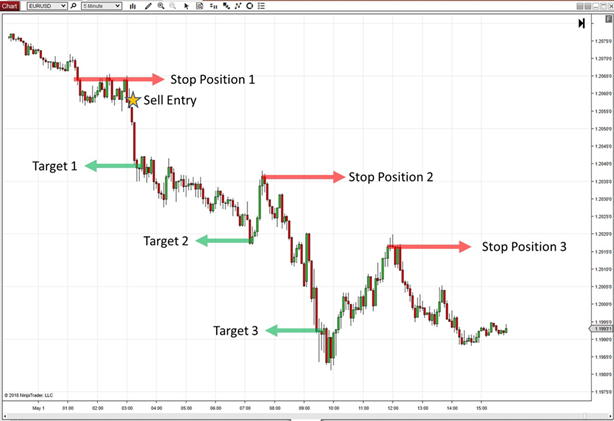 Using our same EUR/USD trend, you can quickly see how each of the waves presents a clear level where a dynamic stop can be advanced to.

This allows you to lock in your profits if you honor the code of the stop:  Never, ever, ever move it back.  Again, we’d like to retire in this lifetime.

You’ll see that the same adjustment can be made with the targets.  With each advancing wave, the target can be advanced.  When entering with multiple lots or contracts, these are the runners that you leave in the position to grab more profit.

With this EUR/USD example, you have your initial exit and then three additional exits as the trend advances.

There is a simple rule to follow when determining your stops and targets:  Look left.  Always respect and honor prior support and resistance.

In the absence of prior support and resistance, establish a profit ratio that you’d like to hit on each leg of the trade.  Bear in mind that your profit ratio, should tie directly to your risk management plan.

If you’re looking to let your profits run, start with a profit ratio of 2:1 – that is two dollars profit for every dollar risked.  Once you hit that, scale and/or reposition to 3:1 and even 4:1. 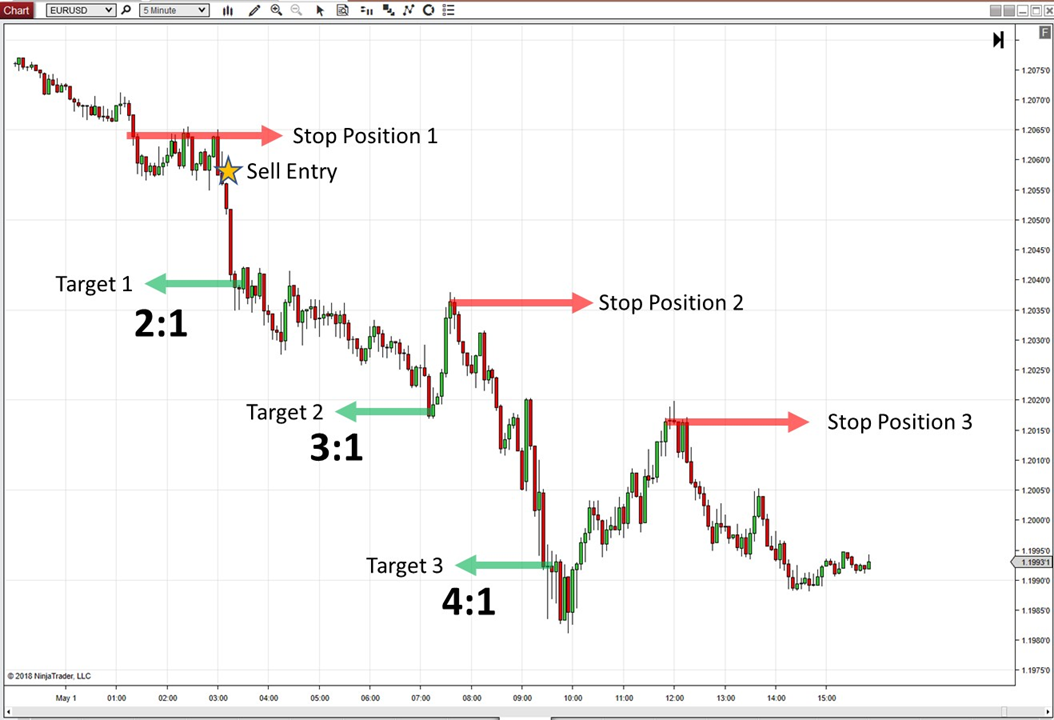 Never head into a trade blind!  Always advance your stops and target your profits to take advantage of every wave!

Combine this ratio with your dynamic stops and you have a system you can use to let your profit run while minimizing your losses.

Above all, your trading strategy with price action – that is number of trades per session, average trade time and risk reward should always align.

If you’re taking 25 trades in an hour, with a 4:1 ratio, plan on losing a lot of money.  It’s impossible to let price action opportunities properly unfold this way.

Conversely if you are taking only one or two trades a day with a 1:1 ratio, forget about retirement or extra spending cash as well.  You’re putting up way to much capital for very little pay off.

Establishing – and following – a suitable ratio will help you avoid both of these common pitfalls.

Whoever said ‘let your profits run’ seemed to leave out the part about managing risk.  No one ever likes to talk about minimizing risk, or even getting stopped out.  These are the realities of trading and they hurt far, far less as long as you take your profits along the way.

Follow this path, and you can start to think about compounding results that will explode your account.

How to grow even a small account into a profits machine.

Three ships, 88 men and a bold commander. Even at $1 billion (adjusted for inflation) – it was a modest effort in the grand context of history. But the results? They were earth shaking for hundreds of years to come.

Regardless of your account size, look at your trading venture with the same expectations. A sea of profits ready to be gathered, one trade at a time.

Consider this, if you started with $500 today, you could double your money simply by compounding as little as 10% every month – in about 7 months. Learn to scale trades and ride waves? The sky is literally the limit.

Here’s the difference between you and every other trader out there hoping to turn a buck: You have a plan and a system that allows you to take advantage of something that will happen in the market every day.

That’s right price action embedded in the nature of the market. The key is having a system to trade with it, not against it.

Start simple. Look for overall trends. Spot the waves within the trends. Enter when you see the wave fade and touch the trend line. Then the fun begins.

Enter with confirmation of the fade, usually your first reversal candle. Set a profit ratio that works best for your system. As price action unfolds and the trade develops, scale into your profits while dynamically advancing your stops.

Leave the old world of losses behind. Conquer a new world of sustained profits that only a few, select traders have managed to find. Keep it simple. Scale. Cut losses.

The profits are there. They are waiting to be taken. Seize them one trade at a time.