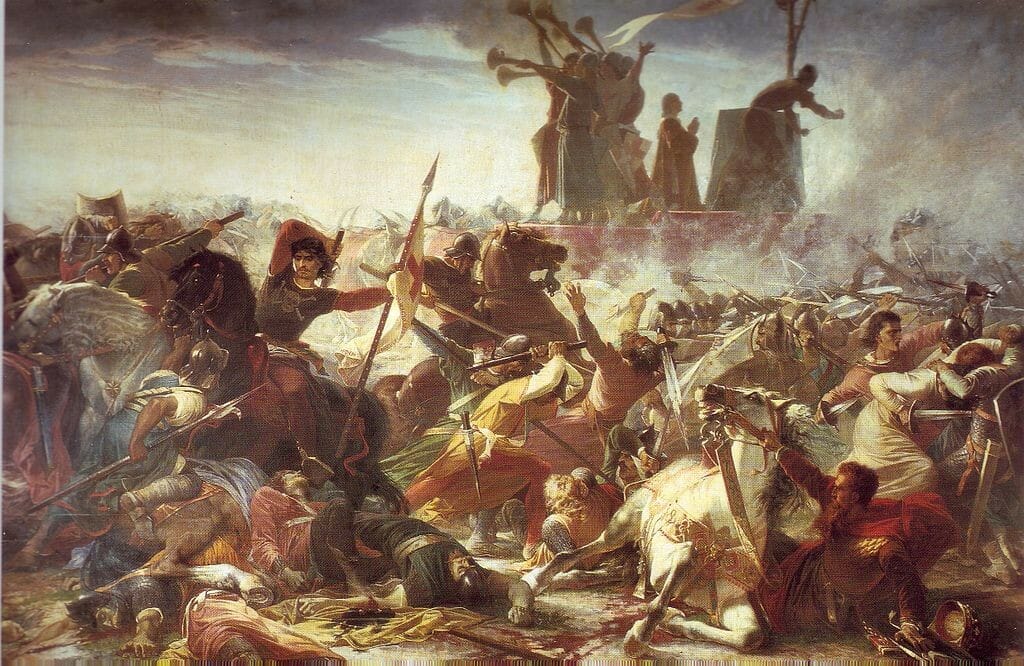 Attack Your Trade Locations With The Fibonacci Circle Formation

Arrows are raining down on your position and your comrades are falling left and right around you. What started out as an organized battle plan has now broken down into utter chaos. The smell of blood and death is starting to fill the air.

Drastic measures need to be taken, not only to advance the battle, but to survive it.

If you were a Roman soldier on the front line, retreat wouldn’t be an option. Instead, to hold your position and move forward, the orb formation would have been immediately assumed. This maneuver involved forming a circle that would provide protection and a foothold with which to attack.

In a market where price is swinging wildly and the outcome is uncertain, you can plot and defend your trade locations using a similar formation with Fibonacci Circles. It can be deployed quickly and can be the difference between winning and losing.

A chart formation that price respects

There are hundreds of ancient Roman formations that are still studied and referenced to this day by modern armies. Like the orb, many of them were so effective that enemies of equal force were overtaken and routed within hours of the first arrow being slung.

Today, the work of Leonardo Bigollo, another Italian, is referenced on trading charts every minute, every day in the form of Fibonacci retracement. Without going into great detail, the Fibonacci sequence (or ratio) is a series of numbers that calculates recurring patterns with great frequency.

The Fibonacci Circles, or ‘arcs’, can be used to mark future support, resistance and reversal zones for price. The primary ratios in the sequence to watch for using this tool are 38.2%, 50% and 61.8%. They take the form of lines on your chart that price will likely retreat, or retrace to, with regularity.

This tool can be used with speed and confidence when evaluating swings and plotting high probability trade locations.

An agile tool that helps you attack price swings

The orb formation was appealing to field generals because it was both effective and highly agile. It basically involved forming a protective circle and advancing as one mass.

It could be assumed at a moment’s notice and could be deployed when a group of troops became detached from the main force during extreme fighting conditions.

When price is especially volatile and the direction is unclear, you can deploy your own ‘orb’ formation quickly with Fibonacci circles. Simply select the tool and drag it from the starting point of a swing to its corresponding low (or high). The resulting circles will be plotted immediately for you on your chart, with the 38.2, 61.8, 100, 138.2 and 161.8 ratios drawn for you.

If you’re trading in NinjaTrader, simply hit F11 and the drawing tool will be there ready to use. Right click on the anchor line shown 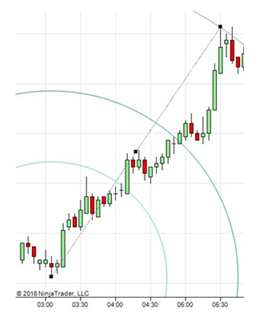 Deploy Fibonacci Circles in seconds and defend your account from volatile price swings.

above if you want to change the colors for the ratios to make them stand out. (Default colors for whatever reason can be light and hard to read.)

Free of charge, and in mere seconds, this formation can be drawn on your chart, giving you a starting point to make your attack.

High probability trade locations that you can prepare for

At the center of the orb were the archers who did the damage. While the perimeter was held down with shields facing outward, arrows could be slung in all directions with reduced risk of being hit with returning fire.

From the innermost ring, to the furthest, the Fibonacci Circles give you several points of attack — with the ability to roam as freely as you need to. When price intersects with one of the arcs, you can anticipate a moment of support, resistance or reversal. 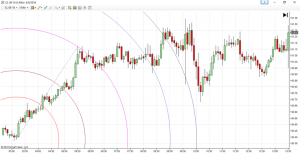 High probability trade locations with plenty of time to prepare your move.

With the circles drawn on our chart, note the frequency with which each of the circles accurately mark these moments well in advance. After the swing was plotted, we see:

Since this is a 7-minute chart, you had plenty of time between ratios to monitor price and plan your move. In the fog of a pricing war, this is great clarity to have with plenty of time to prepare!

Opportunities for confirmation, after you’ve issued your orders

In times of extreme price volatility, it’s reasonable to question whether the time-honored Fibonacci ratios will hold up — or perhaps let you down.

Unlike the actual battlefield the Romans faced, you have an opportunity to confirm where the direction of price is headed before making your move.

Using our example, in each instance, you had a candle or two after the line was crossed to confirm price’s intentions and make your move.

Put your locations on the attack and win

The orb formation required a great deal of discipline and coordination to effectively execute. If just one man failed to execute, the entire group was immediately put at risk.

When price is on the attack and difficult to track you can easily deploy Fibonacci Circles to give yourself a reliable view of the battlefield. Take any swing, select the tool and plot from the tips of the extreme.

Watch the 136.2 and 161.8 retracement lines for support and resistance. When price predictably revisits these points, be ready to make your move. Don’t be distracted by interim swings that could draw you out into the open with a foolish entry.

As your position advances to each concentric Fibonacci line, plot your exit. While the battlefield of the market deteriorates into chaos, lead your entries to victory with this time-honored formation.