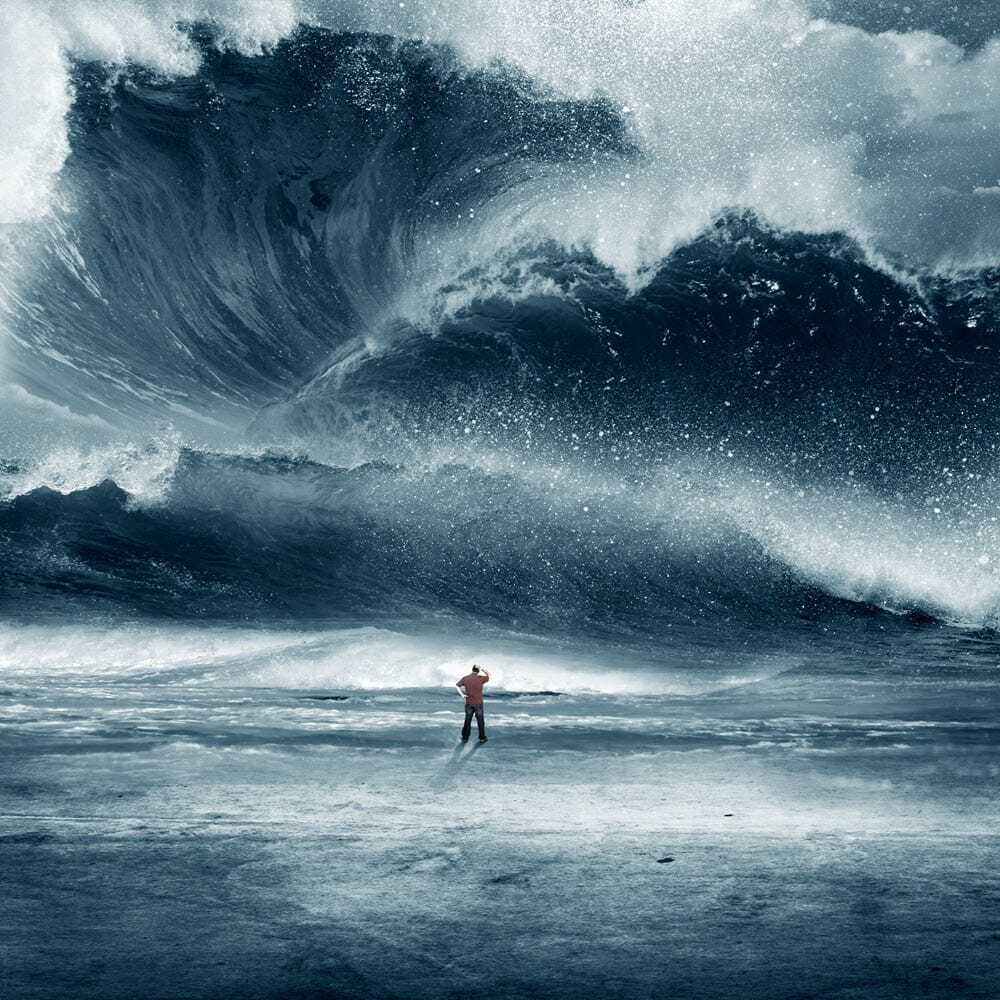 There is no need to fear the institutional tsunamis if you understand how to get out of the way.

Tsunamis travel over a thousand miles across the ocean at speeds of up to 500 miles per hour. As momentum builds waves can reach heights of 3x your house.

Now, it doesn’t take a rocket scientist to realize, “I probably shouldn’t be standing here in the path of one of these beasts!” But by then, it is a little too late for that thought to help much! How did you not see this coming?

Oddly enough, trading can feel like you’re staring down the barrel of a tsunami too. You’re in the market and the small waves are gently moving your trades. Suddenly, you look up and here comes an institutional market tsunami CRASHING down on top of your account!

Frustrating, isn’t it? Then don’t keep standing there waiting for it to happen. Learn how to spot them and ride them instead!

What causes monster waves in the market?

Tsunamis are caused by titanic shifts in the earth’s crust below the seafloor. They are not seen by most, but they are deadly.

Major shifts of institutional money in the markets create the same kind of deadly financial tsunamis as well… if your orders are in their destructive path.

Wouldn’t it be nice if traders too could spot and monitor the financial tsunamis in the markets and protect their trading accounts from these crushing waves? Fortunately they can with trends — like Doppler for ocean tsunamis, there’s a Doppler for market tsunamis… called Trend Lines.

How to use trend lines to find market tsunamis

The good news is, modern technology allows us to measure these trends in the markets just as clearly as we can measure a tsunami traveling across the middle of the ocean.

And, just as with a tsunami, we don’t have to see these powerful waves in the market to know they are there. Today’s technology allows us to measure these forces with the same level of confidence and accuracy with which we measure gravity and earthquakes.

The chart above might just appear at first glance to be random price movements. However, once we apply a trend line to those price movements, we can clearly see the market tsunami pushing the price consistently downward. Each time the price tries to rise and reach the downward trend line it resumes.

As the downward trend continues, the decline becomes more and more powerful. Our indication that the end of the wave is near is when the price is finally able to breach the trend line in an upward movement.

You can see how the trend line is established by a massive downward wave at the third point of contact between the trend line and the declining highs for each day. As the downward tsunami is broken to the upside, the wave has ended.

People are killed by giant ocean waves either because they do not receive the warnings or they simply fail to heed them.

Trading accounts are crushed by giant market waves for exactly the same reasons.

Why you don’t need to fear the wave

When confronted with forces of this magnitude, the reaction of most people is to just get the hell out of the way. But, we don’t need to fear them. We can learn to harness the power of these waves and ride along with them.

Once this confirmation of the wave is established, new trading positions can be opened that will simply catch the new wave and ride along.

Killer waves are coming toward our trading accounts. We can’t prevent them and we can’t stop them.

We can stand there helplessly and watch our accounts be crushed. Or, we can use the tools available to help us ride them to shore.

Once we are safe from danger, our orders can just ride along with big wave-makers.

Ocean and market tsunamis are powerful, fast, and potentially deadly. For traders, these market tsunamis can also be quite beneficial when we learn to catch and ride them instead of fearing them.

When we decide to make the trend our friend, that’s when our trades will start to win.