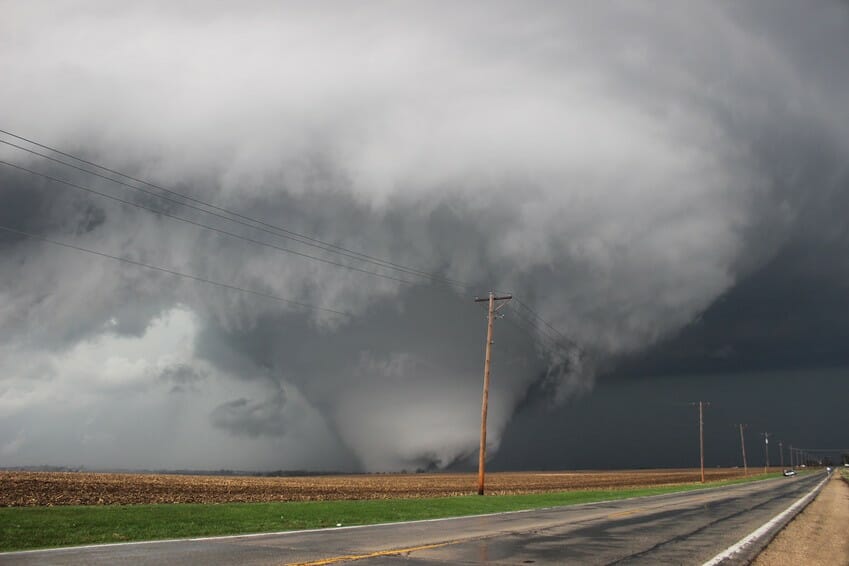 May 20th, 2013. Moore, Oklahoma. When it was all said and done, it turned out to be an EF5 tornado – with peak winds estimated at 210 miles per hour. It would level parts of Moore and surrounding areas on its way to killing 24 people and injuring 377 others. One of the most devastating tornadoes of the modern age – and not the first tornado that week.

Running directly into that storm, instead of away from it, you can find storm chasers – eagerly monitoring the force and direction of the storm. If you’re in the area during tornado season – right in the middle of tornado alley – you can spot them by their weather-ready vehicles outfitted with all manner of storm-monitoring gear.

When it comes to market storms, you can monitor their force and direction from the comfort of your office – simply by keeping an eye on ATR. Doing so will put you in a position to profit from a place of safety.

The tornado that devastated Moore touched down just northeast of Newcastle at 2:46 pm CST and was on the ground for an astonishing 47 minutes, covering 17 miles. While other tornadoes had followed a similar path, this one managed to find homes and schools that didn’t have purposely-built storm shelters.

When a market storm touches down, no one is safe – especially the millions of retail traders that lay within its path. Consider the impact that news will have on price – especially bad or unexpected news. In the last 6 months, there have been no shortage of ‘touchdowns’ ranging from Brexit right down to the recent election cycle in the US.

Moments like these, however brief, have caused price swings that break through years of established support and resistance levels. When they’re in the making – it’s easy to get leveled if you don’t have a tool that tells you there’s a funnel cloud hovering right above price.

It’s the Tornado Intercept Vehicle that races into the storm. Essentially a souped-up Ford F-Super Duty truck – this thing has an armored shell that has quarter-inch steel and bullet-proof glass. It weighs 14,000 pounds and has an engine that could tow a skyscraper.

When heading into a market storm, you can make use of an equally sturdy tool in the form of Average True Range, known as ATR. Used by many professional, institutional traders – this tool actually predates computer-driven methods and is used to monitor and measure market volatility.

Typically, ATR is based on 14 periods and can be calculated on an intraday, daily, weekly or monthly basis. Simply adding this free tool to your chart gives you an immediate look at market conditions from the safe confines of your ‘storm chaser’ – without having to wade into the dangerous winds.

Adding this to your chart can reveal swings as they are about to take place, even as the market rages on.

Conditions you can profit from, no matter how volatile

Among the instruments storm chasers are keeping an eye on, the anemometer measures wind speed – telling the analyst exactly when the storm is reaching dangerous levels. The tornado that hit Moore reached 210 miles per hour – not that anyone in the middle of the storm wouldn’t already know that it was a tad windy out.

ATR is your equivalent in any given market, telling you when the winds of volatility are picking up – or even hitting dangerous levels. Compare this live data to price, and you can spot conditions that may present opportunities for entry.

Looking at our ES chart here, it’s not hard to correlate ATR spikes with significant moments – if not outright swings – in price. With each moment – regardless of the height of the spike – you can see how price, in fact, moved.

Plotting these spikes, especially the pronounced peaks – can present an opportunity to enter on a swing – or a continuation. Simply looking at the overall trend and the nature of the candle will tell you the direction that price is headed.

A reference point you can’t ignore

During times of market uncertainty fueled by volatility – many traders simply choose to sit tight. True ‘weathering the storm’ is an excellent way to preserve capital – but it also means that you could be missing out on definable, high-probability swings.

Monitoring ATR simply gives you a frame of reference as to when conditions are reaching their severe peak – so that you can plan accordingly. Beyond plotting an entry, this tool can also be used to plot exits – or at least signal when you should get the heck out of a trade before you get leveled.

Later on that same spring, three acclaimed storm chasers were killed chasing a storm in El Reno, Oklahoma. Tim Samaras, Paul Samaras (Tim’s son) and Carl Young met their fate doing what they loved. They were among 13 people killed that Friday night – and had been featured on the Discovery Channel show “Storm Chasers”.

You can run towards market storms while avoiding the fate that many retail traders commonly face. Simply turn on ATR and monitor market volatility, especially when storms rage on during high volume periods.

When ATR spikes above 4 – know that you’re nearing the peak of a price rip to the top, or dip towards the bottom. It’s those extremes that you’re watching for – but only when you see signs that the winds of price are dying down. Enter once you see them back down and enjoy the ride back to the other side.

Let others get leveled while you fearlessly intercept profits.