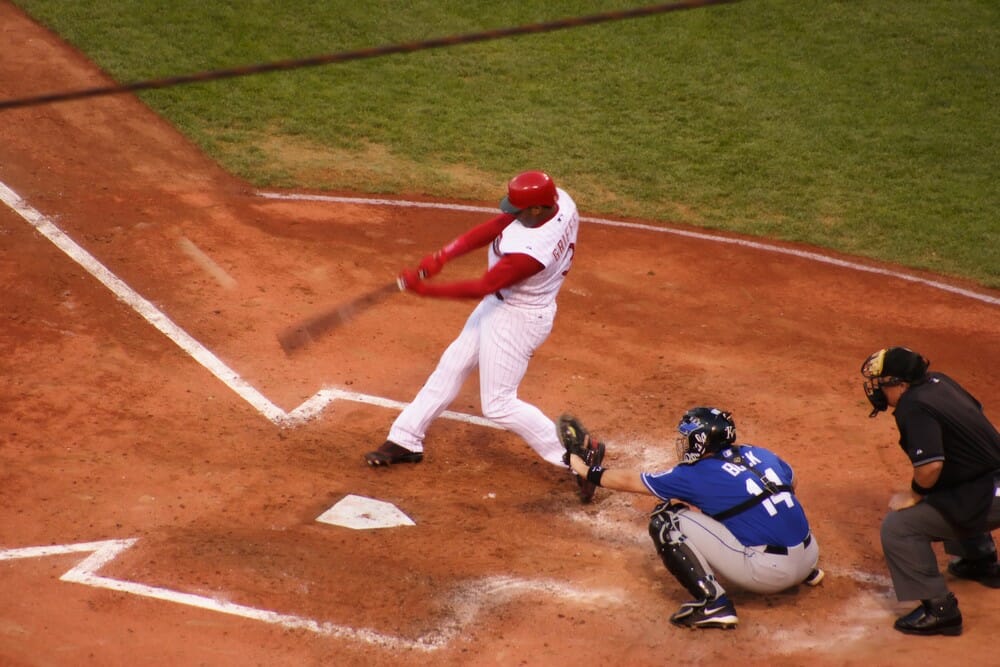 April 10th, 1989. The swing was as smooth as silk. Cool as the other side of the pillow. Ken Griffey Jr. belted his first homer in the majors. To watch it was to see greatness in the making. A legend unfolding. And not just baseball greatness. The whole package. The fans. The money. Life in the big show of major league baseball.

And despite the pressure… Despite the expectations… He came through.

Like any professional sport — the odds were not in his favor. Far from it.

If you’ve ever watched a home run clear the fence and wondered… ‘I wonder if I could do that?’ You’re not alone.

Not exactly a sure bet, but appealing nonetheless.

Needless to say, millions of amateur traders head into the futures market of their choice trying to do the same exact thing… against the same odds. You can almost hear the money flowing as deposits are made into brand-spanking new brokerage accounts around the world.

They’re made with hopes of financial independence and freedom from soul-sucking full-time jobs.

To be clear:  the vast majority of deposits are made to fund small accounts with $5,000 or less. Despite the unbridled optimism, these accounts are often destined for failure before the first trade is ever executed — perpetuating the frustrating cycle of failure that the industry knows all too well.

It leaves millions of traders on the outside looking in — with the same question for all:  How do I take my small account and turn it into something serious?

Here’s a dirty little secret that nobody talks about:  It doesn’t have to be a dream! It can be a reality. And if you do it right… you can put the odds in your favor.

Why fear beats effort every time

It was the swing. So natural. So easy. When Ken Griffey Jr. stepped to the plate, he didn’t even look like he was trying. In fact, he appeared to be moving in slow motion. With every hit, he left pitchers and fans alike wondering… could it really be that easy?

If you believe in the laws of physics… the answer is a definite ‘yes’.

Yet, when it comes to trading… it’s just not that easy.

Despite all the planning… Fear takes hold.

White-knuckled, knowing what’s on the line, they clutch their mouse and make their entry. In an instant, all of the confidence built during their SIM trading evaporates with the prospect of real money being lost.

In that very moment, your capital goes from being small — to being small and scared. This state of anxiety represents far more of a risk to your trading career than any entry or exit you’ll make. Why? Because it sows the seeds for the lack of discipline and poor decisions that will follow.

It’s this fear and scared capital that leads to hanging on to losers along with the overtrading that clears out accounts.

If you’ve ever encountered this feeling, and even the losses that go with it, you’re not alone.

Here’s the good news. There are very simple, and fun — that’s right fun — paths you can take to conquer the fear that holds you back from becoming a successful full-time trader.

It starts with knowing exactly what pitch the market is throwing you.

Pro baseball players at any level will tell you the same thing when it comes to stepping up to the plate. You can’t hit what you can’t see. In fact, being able to actually see a pitch and its movement is the key to getting on base.

The greats? They know exactly what kind of pitch is coming their way the moment the ball leaves the pitcher’s hand.

The same is true with trading. You need to be able to actually see the market if you’re going to trade it. And there’s a real difference between watching the market and actually seeing it.

If you’re trading and losing, odds are very good that you’re simply watching the market — with no real idea what’s happening in it. Sure you may feel like you’re ‘seeing’ and trading price action patterns…

But if you’re like millions of traders — you probably have no idea what ‘pitch’ the market is throwing you.

(Reader’s Note:  There are a number of tools you can employ to better ‘see’ the market. See our other articles about market patterns and trade strategies. For now, we’re going to talk about the other 65% of trading… the mindset and psychology.)

And that’s where the doubt comes in. Because you’re essentially entering your trades with a blindfold on. When the market turns against you — the fear immediately takes hold, and you’re officially on the run.

Then the bad habits start to set in. Position sizes are increased. Stops get pushed back or pulled. Over-trading sets in.

And the losses mount up. Your dreams of going full-time vanish.

The harsh reality? It’s not the market. It’s probably not your strategy.

And the other harsh reality? It’s incredibly common.

So much so, that there are 11 very identifiable stages of market emotion that every trader experiences. Take a look and see if you may have encountered any of these at any given time.

Most traders strike out and head back to the bench by stage 5. The rest are usually done by stage 9.

The ones that make it?

They have a very simple, repeatable process for dealing with the inevitable stages of market emotion.

Dr. Mark Cheng, a strength and conditioning coach, is quoted as saying “When you truly own a movement pattern, strain isn’t part of the picture.” At the top of the list for major leaguers trying to improve their batting? Yoga and pilates.

At the core of those exercises? Breathing.

One look at Griffey in his prime and you know he wasn’t straining a thing.

The same is true with trading.

If you want to get a handle on the emotions that can run your profits into the ditch, you have to start breathing.

Now, you can read as many ‘soar with the eagles’ self-help books as you like.  You can hire a shrink or a performance coach. You can take an expensive online class or even buy a new batch of indicators.

Or you can take three easy steps:

1. Breathe:  It’s not a joke. You have to breathe. In order to manage the stress that comes with trading, you need a breathing regimen. We’re not talking about a meditation app on your phone or yoga classes.

Although those things sound great — we’re simply talking about a breathing exercise that you complete while you’re trading. Count to 10. Count to 100. In through your nose. Out through your mouth. This will lower your heart rate, help to relax you and increase your level of focus.

2. Balance:  Trading can’t consume your life. You have to be able to get away from it. Pursue your hobbies. Stay away from the markets. Physically separate yourself from your trading space when you’re not trading. The more trading consumes your life — the harder (not easier) it will be to focus.
3. Exercise:  You don’t have to run a marathon. But you do need to get out and move. That’s right — move. Go for a walk. Play a round of golf. Whatever. Physical exercise is one of the best ways to increase focus and reduce stress. Being in your absolute best physical shape is a definite plus when it comes to your trading.

Note that these steps have more to do with your life outside of trading. That’s critical. What you bring into your trading — good, bad or indifferent — is often what you end up taking back out of it.

Take control of your trading destiny. Start using these simple, yet powerful techniques to master the cycle of market emotions.

As your profits start to pile up — get ready to make the leap from part-time bush league to the full-time ‘bigs’.

And best of all? Do it with the smooth style and ease that makes trading fun.