Ninjacators / Everything / Riding The Rail On Price To Legendary Profits 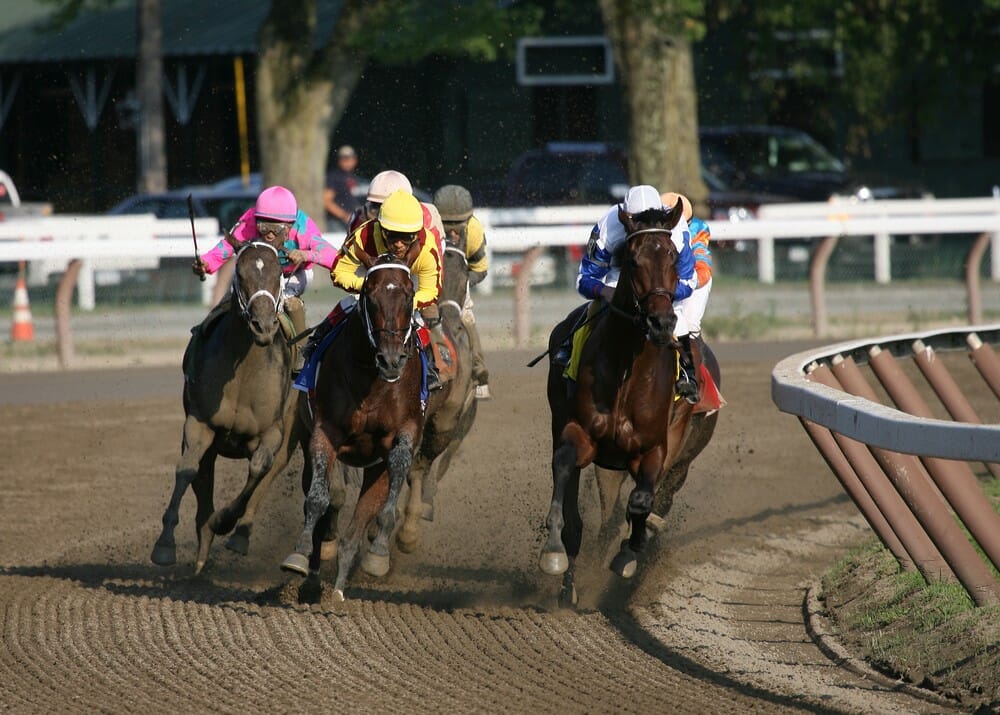 Riding The Rail On Price To Legendary Profits

Churchill Downs, the first Saturday in May. Mint juleps, ladies in hats and a lifetime of money to be won or lost on the horses. Make no mistake, the smiles are all for show – everyone has an eye on the horses and a hand on their dough.

In 2009, a dark horse charged through the pack to take the lead and cruise to victory. Dreams came true and hearts went into cardiac arrest all at the same time with this race. The jockey – Calvin Borel, horse racing’s statesman and a legend at riding the rail to victory.

You can ride the rail to profits by spotting wedge formations in your market. When price is tightly bunched and consolidating, like charging thoroughbreds making the turn – something big is going to happen. Learn how to spot these conditions and profit from them.

A formation that changes your trading odds

He could change a horse’s odds, just by being on his back. Such was the reputation of legendary jockey Calvin Borel. Hailing from the heart of Cajun country in Louisiana with the accent to match – this man knows how to spot an opening in a crowded pack.

Central to his strategy – riding the rail. That is, staying on the inside and coming up through the pack with the rail on your left. It’s designed to exploit any openings that may surface, however narrow. You can employ a similar strategy in the market using the wedge formation.

During periods of heavy volume, price will at times start to consolidate into a range that becomes narrower and narrower. Like a pack of horses jockeying for position, these periods of indecision are just the build-up before a big breakout.

They’re fairly easy to spot on your chart using a long-term 300-day view and a 240-minute time frame. You can profit in the moments leading up to, and during, the breakout.

Why traders get burned during consolidation

Whoever came up with the saying – ‘it doesn’t matter how you start the race, it’s how you finish’ didn’t trade the wedge. Unlike Calvin and his magical come-from-behind wins – your entry conditions will be very important when trading within the wedge.

This is because the narrower the wedge gets, the tighter price becomes compacted, or coiled. When this happens at all-time highs, such as with the ES – you’re playing with fire if you don’t have another method of verification. Using RSI (Relative Strength Index) and/or MFI (Money Flow Index) – along with volume can give you the verification you need.

Pulling the recent ES price performance as an example, as price continued to climb, it consolidated. If you take out the hysteria with the election – you can see that any major breach in both the MFI and RSI had a pretty good correlation with a breach in the wedge.

If you’re not watching for these moments, you could get caught playing a reversal back into the wedge – and get burned when it finally breaks out.

Profiting from the ‘kick’ instead of losing

Every champion has their moment in a race when they make their final ‘kick’. The after-burners are flipped on and the reserve tanks are drained as the final move is made to take the lead. You can spot that moment in Calvin’s races as he creeps along the rail and then sets the horse loose at the perfect moment to take the lead.

Riding the wedge is largely the same. Keep an eye on RFI and MFI to make sure they’re in their primary zones. That’s 80 at the top for overbought conditions and 20 at the bottom for oversold conditions – or 70/30 respectively if you want to play it tighter. Within those ranges you can expect further consolidation.

When the zones are touched or flirted with, you have the opportunity to play very tight pullbacks. When they’re breached, prepare yourself… price may be getting ready to ‘kick’ to a new level.

Like a Derby race, there are winners that oddsmakers love, and then there are the long shots that can bring down the house. Mine that Bird sits atop the list of greatest upsets – with the house having to pay out on the jaw-dropping 50-1 long shot. His rider – you guessed it, our buddy, ol’ Cal.

There are those where periods of extreme consolidation are simply too risky to trade. Where it’s impossible to guess who will come out on top between buyers and sellers. You’re going to bet and have a Mine that Bird moment and get burned.

In reality, plotting the wedge and being disciplined about its boundaries will help you avoid this. Keep an eye on volume along with the oscillator of your choice. When the breakout ultimately takes place – you’ll be able to trade with it.

Close the gap on profits while taking home victory

Among the items Borel’s legendary career has earned him, his nickname is probably the most fitting: Bo’Rail. Riding the rail to make up lost ground has produced some amazing come-from-behind wins and dramatic finishes. He’s since retired and has been inducted into the horse racing hall of fame.

You can land legendary profits, without the drama of having to engineer a come-from-behind win. Simply take a macro look at your chart, using a 300-day look-back at a 240-minute view. Look for price formations that have narrowed to form a point or a wedge.

Plot the narrowing high points and low points on your chart with two basic lines. As price breaches those lines, plot a reversal. The closer it gets to the tip, or end of the wedge – prepare yourself for a breakout. Price is rounding the corner here and the market is going to make a choice – up or down.

Be there to make your move on the breakout, and take your profits with grace.