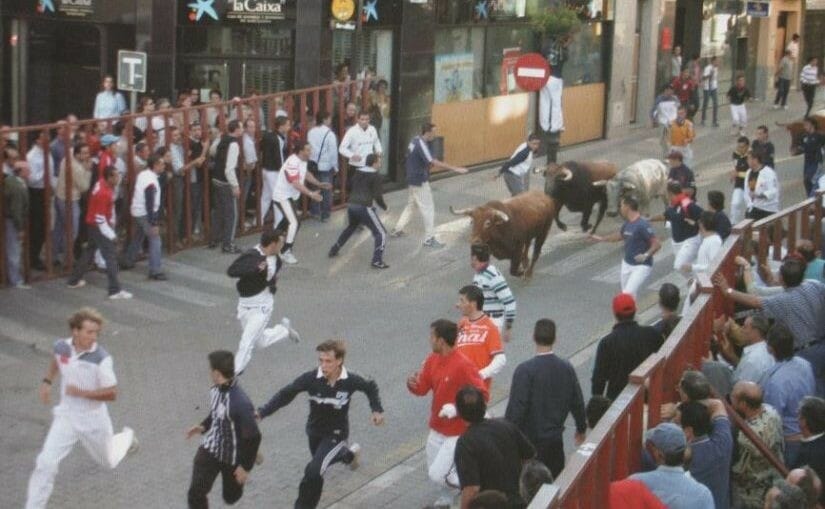 Someone is going to die. It’s either you, the bull or the matador.

Even so, it all begins with a song. How touching. And why not? It seems fitting that anything so thrilling and potentially fatal should start with a song.

If you happen to be standing in Pamplona, Spain at the statue of Saint Fermin – waiting to run with the bulls – it’s best that you sing along. Even if you don’t know the words. At least try to fake it.

Why? Because the bulls are coming, and that song is actually a prayer. You’re going to need all the help that you can get. Despite the ancient cobblestone streets, the bulls can get up to 35 mph.

Around 100 people are injured each year trying to outrun a 1,500-pound bull that’s really pissed off. Go figure. According to CBS, 13 have actually died. (Sounds low). Regardless, you know the bulls sleep well at night knowing this.

If you want to compare those stats to the number of traders that get gored every minute in the market, trying to trade the news – it’s a drop in the bucket.

Every time a big headline comes out, they breathlessly tie a red handkerchief around their poor trade’s neck. The second it’s entered, it’s put right in front of a news event that’s already at top speed with its horns lowered. No prayer needed. The trade is already dead.

Don’t forget to tell your trade to high-five Saint Fermin as it floats to the place where dead trades go.

If you’ve taken a horn or two thanks to a news event, you know the scars linger much longer than the fleeting proud moments of profit.

If you’re looking to pick up an option contract (or more) when breaking news comes out – you’re likely facing the same exact fate. Fortunately, there’s a way for you to run with bullish news events and profit.

Mercifully, there’s a way to trade breaking news events. It doesn’t involve saying (or singing) a prayer. You don’t have to wear (or wave) anything red in the air. You simply need a system. That’s right… a system.

The system involves trading news events in the same way that the natives of Pamplona handle running with the bulls. After all these years, they’ve figured out that you can’t outrun a 1,500-pound raging bull, or have a good time with drunk tourists.

They let the tourists come, spend their money… and get gored. Meanwhile, they stand back, pick their spots and enjoy the festival. They know when to show up. How to avoid the crowds. And most importantly, when to steer clear or go home.

Do they enjoy the running of the bulls? Of course. But they do it from a place of safety. Singing and smiling the entire time.

Applied to trading bullish news events, this is simply a matter of sitting back and waiting for the fade to set in. In other words, you can step in like a native when price overreacts and pick up a position that profits from the aftermath.

It’s time to let someone else get gored, while you profit.

Picking your spot behind the bull, not in front

They say that you can judge a bull’s mood simply by watching its tail. The same exact truth applies to big news events. In whatever timeframe you prefer to trade – you can simply watch as the opposing side starts to step in and push price back in the other direction. This will often show up in the form of long tails at the tips of a candle.

In this case, positive results came back for a late stage clinical trial. Share price loses its mind in the process going from $75 a share to well over $116. Talk about a pop.

Setting the big surge aside, 40% in this case – there was a key moment to watch after the bulls made their initial run. Herein lies your opportunity for profit.

Here’s a perfect example of a bullish news event that’s as explosive as a raging bull: A positive clinical trial.

Everyone gets tired, including a raging bull. You can bet that everyone is counting on it. The crowd, the matador – and, unfortunately – the bull. When the bull loses steam it slows down and then starts to pause before making another charge.

This is the exact moment you want to be watching for when working with a bullish news event. In the case of a clinical trial – this often happens in the pre-market when the stock gets both overheated and overbought.

At the opening bell, you’re watching for the initial fade as the institutional buyers and machine traders exit their positions. As this first sell-off takes place you are presented with both a short and a long-term opportunity.

Depending on your trading strategy and your preferred time frame – these are the chances to run either alongside or behind the bullish news.

For the short-term fade you’re likely looking to exit before the end of that day’s session. As you can see with our example – you can take your intermediate position across multiple sessions.

Trade with the market’s reaction to the news with your choice of short and intermediate positions!

Since you’re not running for dear life – you can make the choice that suits you best.

Simply watch for bullish news going into the market open, wait for the reaction and then pick your call or put position based on the price action that you see – not what you’re trying to predict.

Take your profits like the natives of Pamplona – while the tourists (the rest of the retail traders out there) deal with the horns.