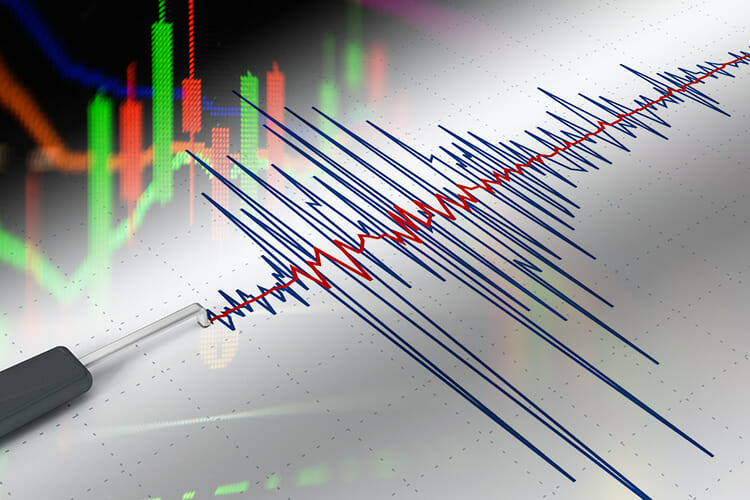 October 17th, 1989, the World Series. The Bay Area was about to cook up a classic, the first pitch for game three of the series was minutes away – until the Loma Prieta earthquake struck. Measuring 6.3 on the Richter Scale, this quake was devastating – destroying bridges, highways and killing more than 60 people.

Scientists have come a long way in understanding and predicting earthquakes over the last 50 years. They still can’t match the prowess of a common toad – that’s right, a frog – which can detect seismic activity days in advance of a quake.

Today, when the markets are about to rumble, you can look to your toad equivalent in the form of tick charts. Surprisingly simple, yet breathtaking in their accuracy – tick charts can reveal the institutional moves being made in any market before price begins to shake.

San Francisco’s Marina district got it the worst – suffering the most damage from the quake. With no underlying bedrock, the ground literally liquified – instantly collapsing a number of structures. The wreckage was further compounded due to ruptured gas mains and pipes – bursting and sparking fires.

Like one of the victims helplessly on the sidewalk that fateful evening, millions of retail traders meander around their marketplace – unaware of what’s about to strike. This is mostly due to the fact that they’re watching price to give an indication that a swing or shake is about to take place. Unfortunately, watching price is like taking the tape off the Richter scale after the fact – it’s often too late and you’re left looking for something to hang on to.

All the meanwhile, institutional traders have been aggressively taking up positions that essentially liquefy the ground beneath their trades. Fortunately, there is a way to tell when the ground is about to shake – and it’s far better than the common toad.

Early radio waves that an institutional quake is coming

According to scientists, it’s the P-Waves – which are like sound waves – that make the toads go crazy. In fact, animals that burrow into the ground and/or are attuned to vibrations will detect these P-Waves which are sent at the early stages of a quake – days in advance.

Tick charts can be your ‘P-Wave’ equivalent when monitoring your market. Instead of tracking price over time, like typical candles – tick charts track the number of trades per par. Sitting right there, ready for use – all you need to do is set the number of trades you’d like each bar to represent. You’ll see how quickly the market is moving at any particular price level.

Note our ES example here. With something as momentous as the U.S. Presidential Inauguration, you can see the high levels of activity driving price, over a short period of time – in this case the 11:00-11:05 period. Make no mistake – it’s not the retail trader at the wheel driving this – it’s the institutions.

Seeing this concentration puts you in a position to move with the institutions as they drive price – or get out of their way early like the sensible toad.

Profiting with the institutions, regardless of direction

History has a long record of animals leaving town when something bad is about to happen. In the case of the toads, they take off when they detect the ‘P-Waves’ coming their way in advance of a quake. Studies have shown that there are rarely any stragglers – all the toads leave town.

When tick charts start to quake, you don’t need to run. Often these early movements are great initial indicators that you can get in on. It’s often a matter of managing the timing and intensity. Comparing the two ES charts, note how tick activity pressing price down preceded the traditional time-based chart – by almost 10 minutes.

Using ticks as your early indicator – you can spot big moves and their advance impact on a market. When price finally responds, you will have already made your move – alongside the institutional traders who have made their move.

Don’t get caught with the quake, benefit from its early signs.

Often overlooked but critical when monitoring the market

Tick charts are about as common and accessible as the common toad – yet why do traders choose other tools to monitor their market? With price oscillators being the preferred method for monitoring market – volume is often overlooked as a valuable indicator of what’s coming.

Although helpful, evaluating price action oscillators that don’t factor volume can run the risk of being late. With volume being at the core of tick chart evaluation, early moves that drive big price swings can be detected. Specifically, you’re looking for concentrations over a comparatively short period of time as your ‘p-wave’ equivalent.

Be careful to set trade thresholds that make sense for your market. A bar setting that’s too high and you’ll miss the activity as it develops – only catching moves that are extraordinarily big. Too low and you’ll get caught with market noise.

Game three was finally played 10 days later. The A’s would slug their way to a win and take the series with a sweep. 28 years later and scientists are only able to vaguely predict general locations of earthquakes. To be fair, they’re getting a lot better at predicting the aftershocks. Toads everywhere are shaking their heads.

Don’t let seismic shifts spurred on by institutional traders catch you off-guard. Add tick charts to your view of the market and go the way of the toads, detecting moves well before price finally responds with a loud quake.

Simply set the tick size appropriately for your view of the market – 500 per bar/candle on the ES – or potentially more. When you see large concentrations of trades at a particular range – outpacing the time-based chart – you know a move is underway. Trade with the move knowing that the institutions are at the wheel.

Benefit from seismic shifts with the toads, while everyone else runs for cover.