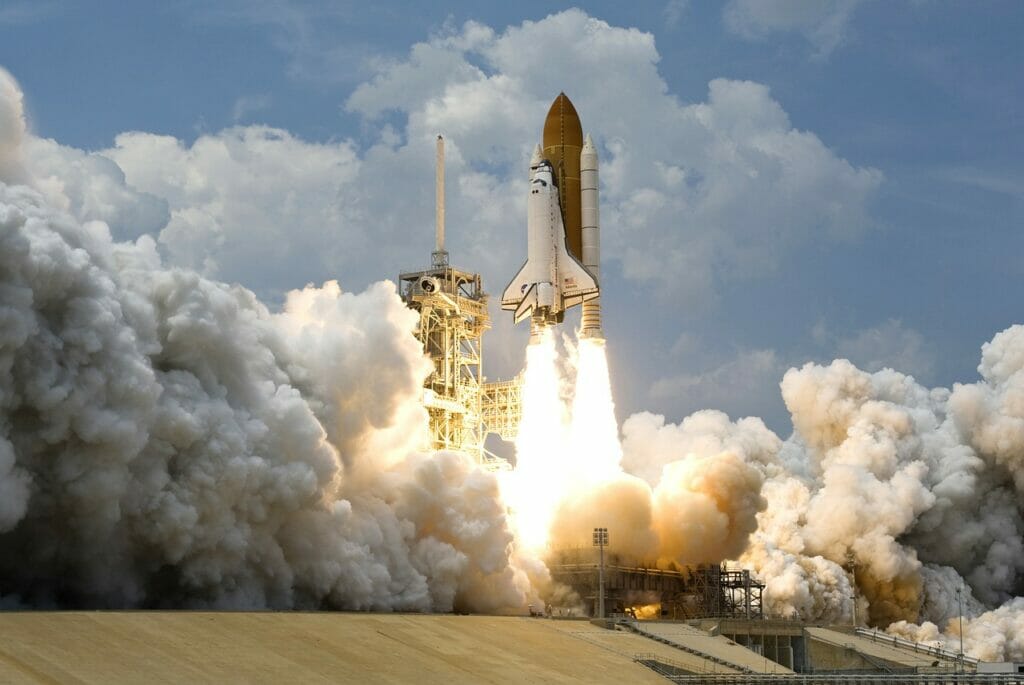 Launch day, Kennedy Space Station, Cape Canaveral. The 40-hour countdown is down to its final 10 seconds. The crew is in place, and fuel has been pumped into the main boosters. The ‘go for main engine start’ command is issued.

At T minus 6.6, the three main engines are ignited and throttle up to 90% thrust in three seconds. If anyone’s having second thoughts, it’s time to bottle them up for the launch mission because the rest is up to the Shuttle’s four primary flight computers.

Whether you’re ready or not, the market launches every day with an explosive start. Watching the opening range, or first minute, can tell you a lot of what you need to know when plotting an early entry.

A critical gauge to watch when the market takes off

It’s the flight director that calls the shots from mission control in Houston. The position made famous by Ed Harris, asking for a ‘go, no go for launch’. For as pressure-filled as the job might be, there are a series of ‘hold’ sequences built into the countdown. This gives him/her a chance to evaluate and verify launch data.

Give your trades a ‘go, no go’ for launch using the opening range established in the first minute!

During the first minute of trading, you have a ‘hold’ sequence that you should run as flight director of your account in the form of the opening range. During this first critical moment you can watch how price behaves before plotting an entry.

It’s during this first minute that the high/low range is established, which will be respected for the initial, high-volatility moments of the day.

Thrusters that price needs in the opening moments

The solid booster rockets happen to be the first solid fuel motors used for propulsion. They serve as the primary thrust that gets the shuttle into orbit. Their job is done and they are jettisoned within the first two minutes of flight.

Whether you’re ready or not, the market launches every day with an explosive start. It’s the flight director that calls the shots from mission control in Houston. The position made famous by Ed Harris, asking for a ‘go, no go for launch’. For as pressure-filled as the job might be, there are a series of ‘hold’ sequences built into the countdown. This gives him/her a chance to evaluate and verify launch data.

Likewise, the first minute of market activity serves as the solid fuel booster in the early stages of the trading morning. Instead of thrust, you get range — which is just as valuable when reading price action.

The established range in the first minute gives you important support and resistance levels which will be honored within the opening moments. It’s also monitored as a breakout area for range extension traders.

After months of planning and an official countdown that runs 40 hours long, it only took the shuttle eight and a half minutes to reach space and start orbiting. The main engines provide the final push and in less than 10 minutes, the balance of the mission begins.

The Opening Range can be used for bounce trades, or breakout trades, in the first 10 minutes. After that, like the shuttle mission — the market tends to move on. If you’re a scalp trader, operating with a minute time frame, you can grab quick reversals in the first ten minutes.

Start your day’s trading mission with reliable reversals and breakouts – all in the first 10 minutes!

Note how price behaves in the first ten minutes of our ES example. You would have been greeted with a couple of quick bounces — a break up top for a long — and then a break at the bottom for a great short.

Like a shuttle mission, the first ten minutes are pressure-packed, with plenty that can go down if you’re not watching closely. Many traders choose to sit tight until the morning unfolds, not wanting to take the risk of the opening moments.

Bear in mind that a lot of data is packed into that first minute — including the news and the activity of adjacent markets that have already opened. The first minute reflects that pent-up sentiment that’s been waiting to be released — and the range tells you the depth or spectrum of volatility that price is willing to entertain.

If you’re skeptical, mark the opening range on your selected markets and watch it for a full week. You’ll be surprised with the reliability that price respects the top and bottom of the range for the opening minutes.

Launch your trading day with profits, not worry

When the countdown gets to ‘zero’, the Shuttle’s holddown explosive bolts are blown by a command from the on-board computers. No turning back now — the Shuttle is committed to launching — or tipping over. At T plus 7, the Shuttle clears the pad and heads for orbit.

Watch for that critical first minute as the market clears the tower and sets course. Use the opening range established in the first minute as your guide. Follow the high and low as support and resistance. If either is broken — take the trend. If it’s respected — profit from the bounce.

Be sure to act quickly, in the first 10 minutes. After that your moment will have passed and you will be at the mercy of the market’s gravitational forces. Keep a steady hand and a clear eye. Give those early entries the profitable flight they deserve.