Ninjacators / Everything / Trade With A Safety Harness That Protects Your Trade 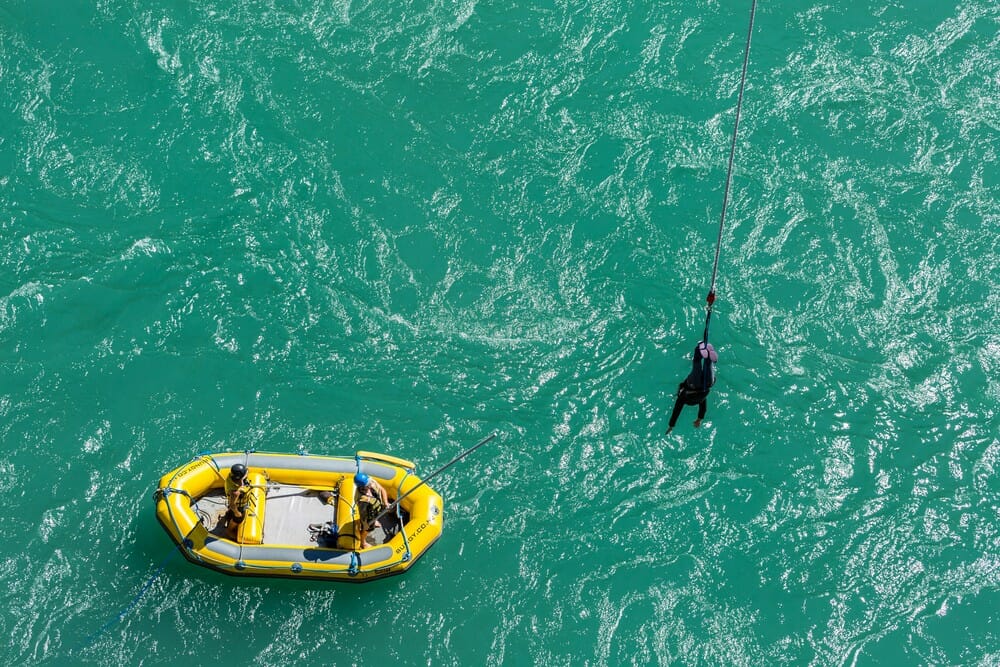 Trade With A Safety Harness That Protects Your Trade

They could see him, but they could do nothing to help him until the fire department came. Such was the predicament a Houston worker found himself in as he dangled more than 100 feet over the Houston Ship Channel in 2015. Luckily, he had a safety harness safely secured – and it was holding.

Every day, traders enter into a market without a safety harness of any kind. Emboldened by a few wins that have padded their account, they jump into a trade without any thought of potential disaster. It’s only when they see price bring their trade to a gruesome end that they think of the benefits of putting safety measures in place.

With two quick additions – you can keep both your entry and exit from plummeting to its demise. It involves the basic analysis that comes with Bollinger Bands – and the addition of dynamic stop management.

Trades retail traders make that go over the edge

According to KPRC Houston, the Texas Department of Transportation worker lost his footing. Talk about a fall. It seems he was on a walkway beneath the bridge to perform ‘preventative maintenance’ when he went over the edge. Probably a fluke accident that changed his day in a second.

The second 95% of retail traders make a trade – they almost instantly find their position falling over the edge. They take entries and track exits that are hanging in mid-air – with nothing to save them from a massive loss. This often happens because they’re trying to play intraday price action – but end up getting burned.

While it may seem that the market is offering an opportunity that’s on sure footing – in reality it’s a plummet in waiting. Fortunately, there is a fast, easy way for you to put a safety harness on your entry and your trade once it’s in market.

Two tools that bring kevlar-like protection to your chart

Among the materials you can find in a decent safety harness: kevlar. That’s right, the same stuff that stops bullets. For the time that the worker was hanging in mid-air, this had to have been a reassuring detail as he looked down the hundred plus feet. Help couldn’t come fast enough.

You can add some kevlar to your chart in an instant with Bollinger Bands and ATM. These two very different tools can be interwoven to give you protection on both the front and back ends of your trades.

Starting with context, Bollinger Bands – you have a volatility indicator with an upper and lower band that give you the standard deviations above and below the moving average. A quick look at the below 6E chart tells you how closely price follows these bands – even in times of extreme fluctuation. The middle band, the moving average, serves as a stop, or check-in point, for price as it moves from one end of the range to the other.

If you’re entering into a trade and you don’t know how far away from a moving average price happens to be – then you’re essentially jumping over the side of a cliff. Add ATM to this and you have an automatic stop added to your chart if you experience a price fall in the wrong direction.

Using these two together can bring additional safety to your trade.

Entries you can profit, even rescue if needed

They tried to rescue the worker via a telescopic platform at first. No luck. In the end, it was a manhole on the roadway that gave them a clear line of sight to him – which they used to make their rescue. The fire chief was quoted as saying that moment was ‘game time’ for him and his crew.

Enter game time with the safety measures you need. Then stalk trade levels that are a lot better than peering through a manhole cover. Thanks to the upper and lower Bollinger Bands – you have clear markers when price is reaching extremes that pull away from standard deviation.

If you’re looking for an entry, stalk the upper and lower bands. Make sure you have ATM turned on via chart traders – and set to a ratio that matches your risk/loss plan. Once you’re filled you’ll have automatic stops and targets that reflect your trading plan.

Once in the trade – you’re now protected if price suddenly moves against you before you have a chance to exit. An event that happens all the time in a market like the 6E.

Bring a safety harness to your trades while profiting

The Houston Fire Department managed to erect a special tripod above the manhole and used it to lift the worker back through. Quite a feat – and a story that he’ll no doubt be able to tell over beers for years to come.

Save yourself the drama. Add Bollinger Bands and ATM to your chart. Don’t enter into a trade without knowing where you’re at relative to the upper and lower bands. If you’re in no man’s land, you’re probably staring over the edge straight at a loss. Never enter without having your safety harness strapped on in the form of ATM.

Once in the trade, manage to the mid-point of Bollinger and adjust your stop to minimize your risk. Never move your stop back, since that only increases your risk – it’s like unsnapping a portion of your harness.

Take your profits and manage your losses without endangering your account along the way!