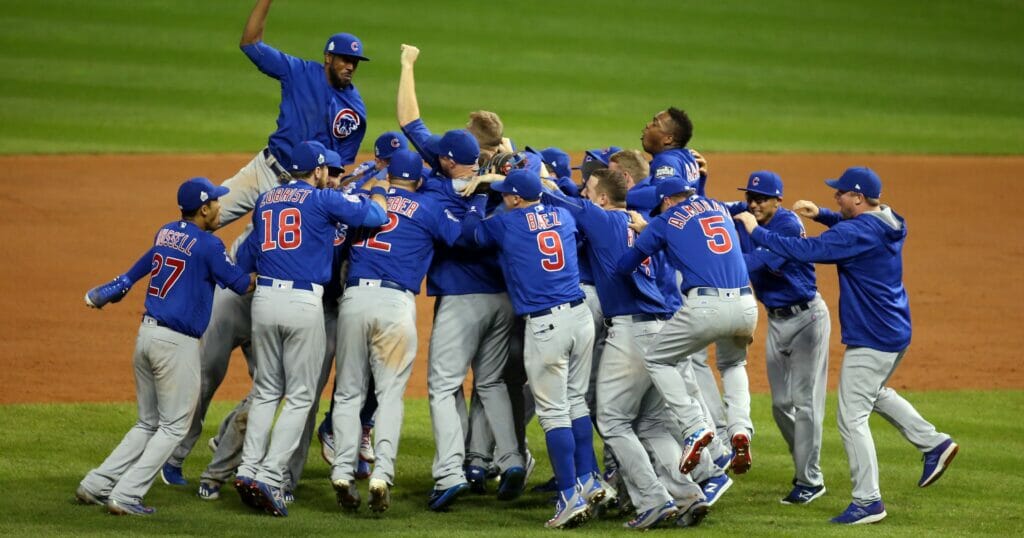 Down three games to one. Staring elimination, and a 108-year curse, directly in the face — it seemed clear that fate would not be on the Cubbies side after all.

Sunday night, Game 5, Chicago — you could cut the air with a knife as millions of fans fought off those all-too-familiar feelings of loss and disappointment. Not Theo Epstein. The architect of the ball club had a plan that started four years ago. He asked for patience and accounted for setbacks, all for the ultimate payoff — a World Series.

In the pursuit of trading greatness, you won’t get far without a plan. No, not a trade plan — but a business plan. One that accommodates setbacks and keeps your account alive. Architecting the right plan can be the difference between continued disappointment — or full-time trading income.

A critical barrier to winning that most traders overlook

The path to beating back the curse actually began with a wrong number. Wanting to sell more tickets, the Cubs took out a full-page ad, but got the 1-800 number wrong — sending respondents to an adult entertainment line.

Gradually, things turned around and the team eventually won 103 games on their way to taking the World Series. The key? Patience — and a realistic plan.

In today’s glutted marketplace, filled with gadgets and signals that are all profit-focused, millions of retail traders enter thinking that they can get rich quick. This thinking is flawed — not just because it’s untrue, but because it puts an overemphasis on profit over losses.

In reality, consistently profitable traders aren’t just great at scoring — they’re great at preserving capital. While most traders focus on profits, those earning a full-time income are focused on a disciplined plan.

An approach to planning that yields a champion

For Epstein and the Cubs it begins with WAR — Wins Above Replacement. Essentially this captures a player’s total contribution to their team in one statistic. It’s all-inclusive and provides a good reference point when comparing players.

When evaluating your trading plan, you don’t need a synthesized stat to tell you how you’re doing. You can simply track by profit and loss. The fundamental key: Having loss targets that you don’t move, along with profit targets that are realistic.

Take your starting capital base, look at a single trade and ask yourself: What am I willing to risk and what do I expect to earn in between? This ratio essentially becomes the basis for your loss and profit targets. Set a loss limit and a profit target for each trade — then expand this into targets for each day, week, month and year.

With this in place, evaluate your trading strategy. Specifically look at the number of trades you take and determine a reasonable win percentage — knowing you won’t run the table — based on your target profit, then evaluate whether your strategy makes sense.

Advancing your trading career regardless of how you start

As John Harper wrote: “It’s not as if Theo Epstein showed up in Chicago and turned water into wine. The Cubs lost 101 games in 2012, his first year on the job.” They would go on to lose another 96 the following year, fueling a cynicism only a city that’s gone 108 years without a championship ring could conjure up.

Losses are an important part of trading in that they keep you honest, and force you to evaluate your overall strategy from time to time. When getting your account off the ground, or even turning it around, a reasonable allocation for losses will help you take the bad with the good. This perspective helps even out the lows that can come from losing and the highs that can come from winning — both of which are equally dangerous.

In addition to preserving capital, respecting your loss targets and plan will require discipline to maintain. When you’ve hit your target for the day or the week, head to your SIM account and practice. There’s no better substitute for the harsh reality of practicing in a SIM so that you’re sharper with the capital you have left.

In the end, like the Cubs taking their early lumps (108 years worth of lumps), the discipline can only help you as you start to pile up wins.

Many argue that the market is fluid, not designed for any single plan or approach. While there may be some truth to this, one hard and fast rule must apply: you can only lose so much.

Having a loss plan that expands and contracts with your account — without ever changing its base principle — will help you with the changing dynamics of the market. To support this, many choose to go with a percentage-based approach that gives them the flexibility to maintain the fundamental intent even as the size of the account changes.

Profiting with style even in the face of losses

In the end, in game 7, it took a blown save, three errors and a little rain. But the Cubbies got it done. Even in the face of a heart-wrenching, game-tying homer by the never-say-die Indians in the bottom of the eighth.

You can win — even in the face of losses — simply by being disciplined and accounting for them from the outset. Build a business plan that clearly lays out your loss limitations and profit targets — for each trade, day, week, month and year.

Account for your learning curve, limitations and trading style. Above all — know when you’ve hit your limit and respect it the moment it arrives. Stay in the game long enough to hit for extra profit and take home the trophy.